Given that my two existing shunting layouts were both linear in concept, I found that I needed a test track with continuous running in order to run in new locos.  Having this in mind, I unashamedly copied a 1990’s Brant Hickman design & rather than having a bare board decided that a scenic finish similar to Brant’s could be accommodated using mainly parts from the “spares box”.

Constructed with little more track than supplied with a proprietary train set, Kidmore Magna measures just 30D” x 24W” (76cm x 61cm) with a scenic section of just 18D” (at max) x 24W”.  Hopefully it demonstrates that a successful model railway can be built in the smallest space and with minimal expense!

When the GWR decided to extend its service between Williton & Listock harbour on Bridgewater Bay, the Quantock Hills, particularly Kidmore Hill at the edge of the QuantockForest, required that the line had to be curved very sharply before entering a tunnel through the hill.  Unfortunately the only suitable location for a station for Kidmore Magna, the village being some half a mile distant to the East, was on the inside of what became known as “The Curve”.

As a result, Kidmore Magna station became famous for having one of the most curved station platforms in GWR history.

The town fathers of Kidmore Summer, situated some five miles to the South West, felt that they had been snubbed by the GWR and petitioned to have their own branch line, but were turned down on economic grounds.  Forming their own company, the KS&R, some local businessmen and landowners managed to get a branchline of their own built joining “The Curve” just south of Kidmore Magna Station.  The line was however never very successful and closed after only thirty two years.  The only remaining section of the former KS&R can be seen in what is now the goods siding for “The Curve” station.

Having survived ‘Beeching’, the line is still modestly successful with a regular passenger service boosted in summer by holidaymakers heading for the coast.  Freight has always played an important part in the line’s success and includes coal, farm produce and other goods heading to or from the harbour at Listock.

Given that there are a minimal number of buildings on the layout to define an era, rolling stock operation can be varied by simply altering the type of road vehicles.  This allows running traffic both from late GWR days to the more recent past.  Electric light signals (Berko) were introduced late to “The Curve” and the signal box had long become derelict by then.

A Peco electromagnetic coupler has been fitted within the siding.  I find these work well provided the angle of the lift arm is achieved correctly.

Other than the two span viaduct, construction has been via my normal methods; polystyrene covered with a plaster filler followed by burnt umber acrylic paint then various combinations of Woodland Scenics materials.  The bridge however comprises two plaster single track viaducts fixed side by side, necessary to accommodate the curved track.  These are topped by Lyddle End granite walling.  In places, curvature is barely 9” but I have experienced little problem with stock (a Farish Class 47 being the main exception).  The river exit from under the roadway is also a plaster casting.

One planning failure I did make was that my original thought was to install lighting to the station & car park.  Work however on the river which of necessity meant joining the river bed & banks to the main baseboard subsequently prohibited said construction.  Point learnt.  I have not as yet fathomed out how to achieve this retrospectively.

The four main buildings, including the derelict signal box, are from Lyddle End, Scenecraft, & the ubiquitous Ratio goods shed.  There are over sixty trees on the 24" x 18" scenic section. 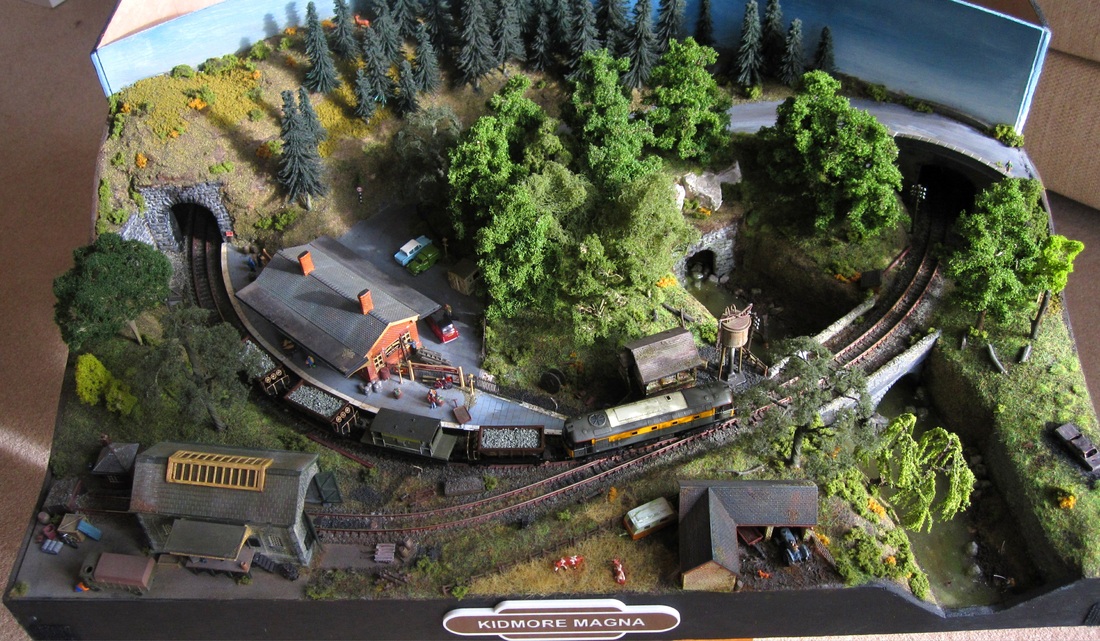 Kidmore Magna was published in the N Gauge Society Journal, 4/10

The layout was also published in the December 2012 edition of Railway Modeller magazine, Peco Publications.