PLEASE  NOTE THAT I DO NOT INVITE LAYOUT COMMISSIONS, ALTHOUGH I DO OCCASIONALLY SELL LAYOUTS ON EBAY ONCE I AM TIRED OF THEM !  LAYOUTS SOLD ARE LISTED BELOW.
Exhibition Managers who wish to book a layout, please either use the contact page at the end of the site or email dmitch01@freeuk.com.  Currently I have a choice of nine exhibition layouts in  N , 009, HO, and 00 gauges.
The Web pages of a "Layoutaholic" !
"I have no sympathy for the model railroader who says he has no room for a layout. There is always room for a layout.  It may not be the railroad of your dreams, but it can be something on which you can operate some of your rolling stock." Chuck Yungkurth, Model Railroader Magazine,
April 1966.

Having found an interest in model railways on retirement, I concluded that the space constraints of modern houses were not conducive to large model railways unless one could afford a loft conversion.  I couldn't.  Looking at several options within the model press & on the Net, I decided that rather than a single permanent layout, variety could be achieved and potential construction boredom alleviated, with small self contained examples.  These are generally referred to as "Micro Layouts" or "Field of View Layouts".  Such layouts provide the advantage of portability, a boon when invited to exhibitions, and variety given that a different approach / theme may be levied with each new build.  I originally concentrated on N Gauge (2mm) thereby ensuring that a lot could be modelled in a relatively small footprint when compared with OO gauge equivalents; the latter invariably requiring at least 150% more footprint.  Irrespective of scale modelled,  my layouts are usually five square feet or less allowing both easy transportation by car and storage.

These pages detail the construction of my layouts.  At least fifteen layouts have so far been exhibited whilst four have been published; details on their respective pages.   My first OO Gauge layout had its initial public airing in 2014 & this was followed in 2015 by a second build.  A third & fourth were both completed in 2016.

Layouts in both Z & O gauges have also been built but  both gauges have left me uninspired, although a fresh & more successful attempt at Z was completed in 2016; sold in 2018.  I frequently sell off layouts (twenty three or more to date) once storage space has been exceeded & I need to make room for a new build.

"Quarry End":  a combined 009 and 00 gauge layout featuring the interchange sidings of a quarry. 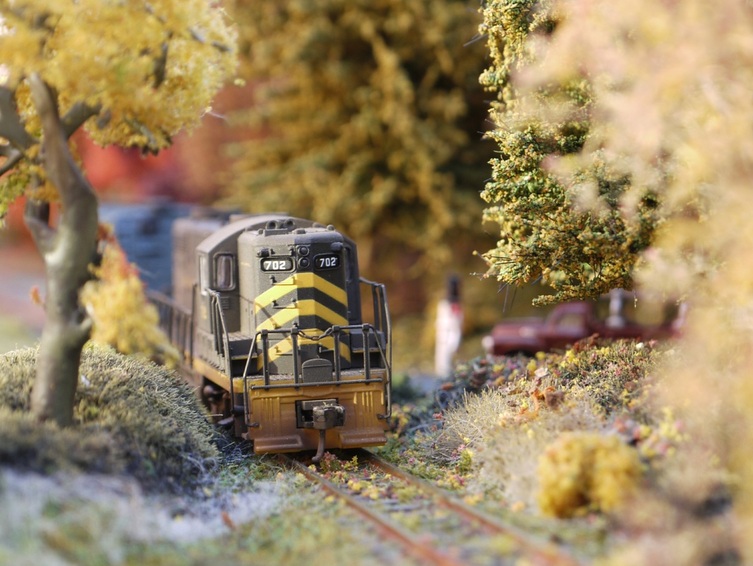 Taken on "Kidmore Creek" on a sunny Fall day.
Powered by