The trackplan below is a reduction of an HO scale plan to N Gauge sizing.  A priority was to keep the long sweeping lines of American track work.


Baseboard was originally built at 4' x 1' with a 7" removable overhang at the RH end to provide greater length trains in the hidden siding (loco plus three box cars).  Unfortuneately I had not taken into consideration the length of the RH siding immediately above the creek; sensibly this too needed to be able to accept a minimum of loco plus two cars, preferably three.  This necessitated an add-on to the baseboard filling in the space beneath the original overhang. The joint can be clearly seen in the second photograph below.  The board is now about 55" x 12" and can be operated from both the front & rear by simply repositioning the control panel.

The layout is based around the operations of a North American grain elevator depot.  These elevators could be seen in the majority of grain producing areas of North America.

The grain elevator depot receives, stores and ships grain in bulk.  When a farmer delivers grain to an elevator, the grain lorry is weighed, then unloaded into the grain pit. With the lorry now empty, it is weighed again, and the weight difference is recorded. While the grain is pouring into the pit, the elevator manager determines its grade, dockage, and moisture content, as well as checking it for infestation and contamination.

Once accepted, the grain is moved to storage, either in an empty silo bin, or in one containing similar grain. Nearly all grain shipped from an elevator leaves by rail. An arriving rail car is opened and inspected, and the loading spout is placed  inside. The manager has the distributor channel grain into the loading spout, which begins drawing grain and dumping it into the hopper scaleback pit. The elevation leg then lifts the grain and drops it into the grain car. When the car is loaded, it is closed and sealed.

A recent problem with grain elevators is the need to provide separate storage for ordinary and genetically modified grain to reduce the risk of accidental mixing of the two.  No such problem on the layout!

March 2013: Layout changed to DCC sound operation.  I note that American DCC sound locos are only about one-third the cost of similar British rolling stock!

Close up of "the hole". This will be the creek in "Kidmore Creek". Note the baseboard join; an extension necessary to provide added siding length. [Nov 2011]

The awkward side. Wiring complicated as, for exhibitions, I want to be have the option of operating the layout from both sides. [Nov 2011] 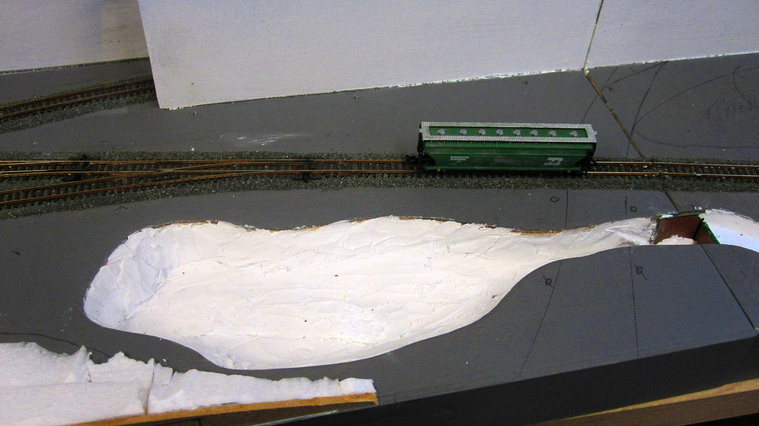 Sleepers & track now weathered. Side walls & base of creek completed; polysterene covered with Polyfilla. Also some contour work can just be seen on the LHS. Drawing of road position & placement of crossing lights can also be seen. [Nov 2011]

The Creek before adding the "water". 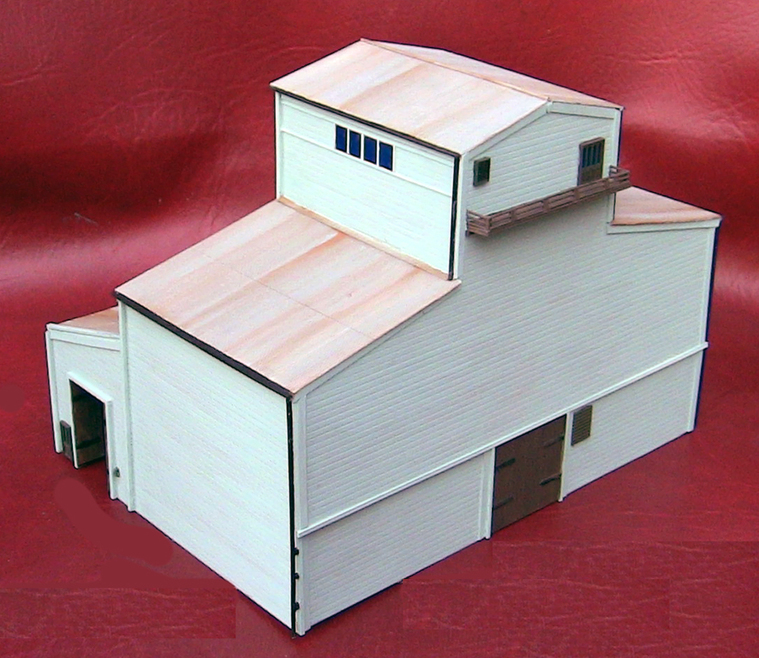 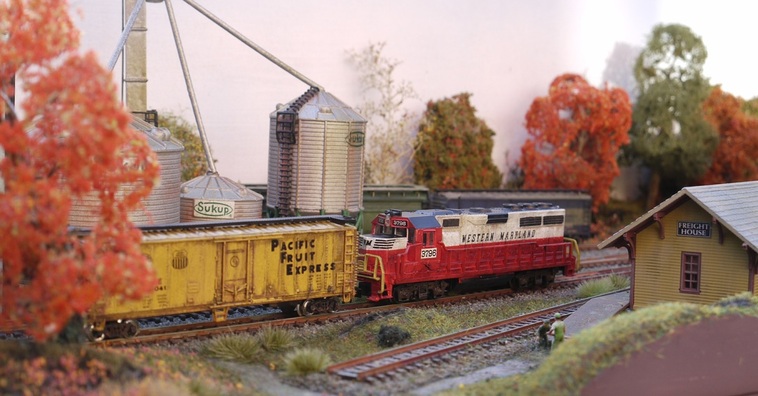 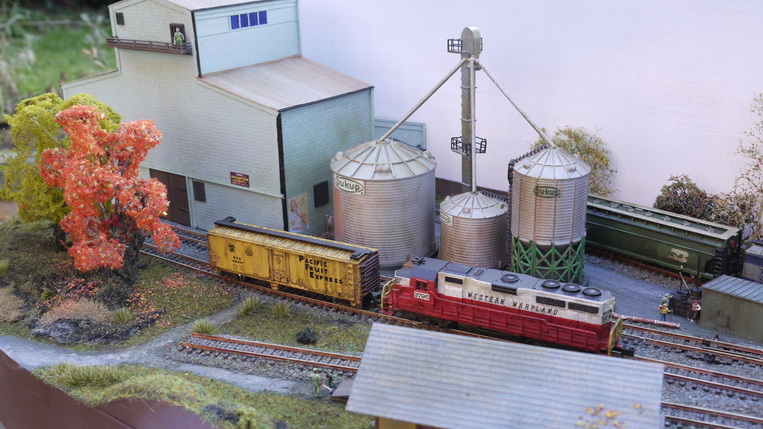 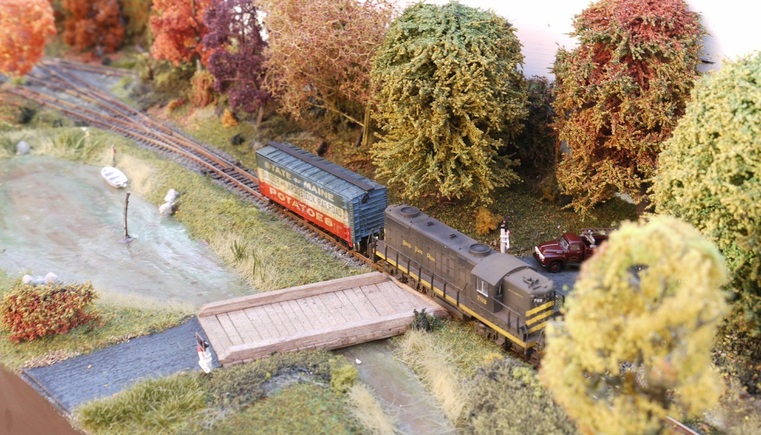 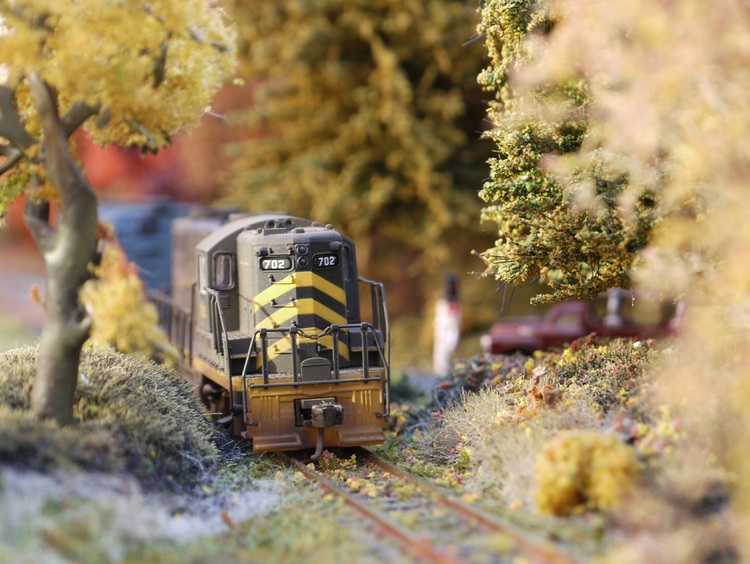 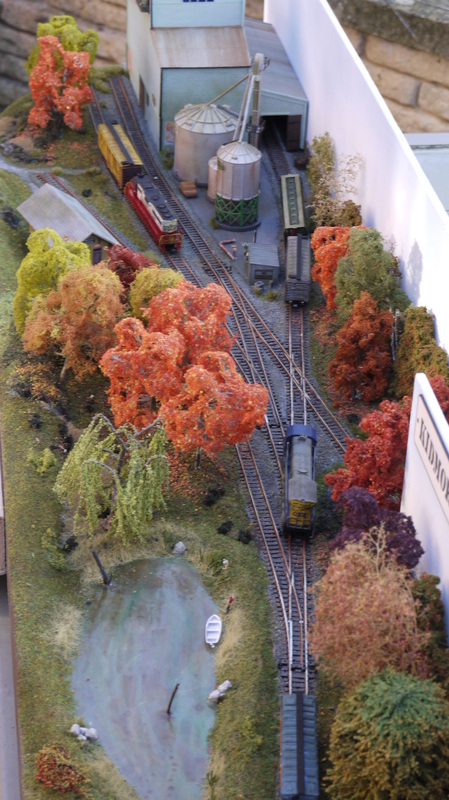